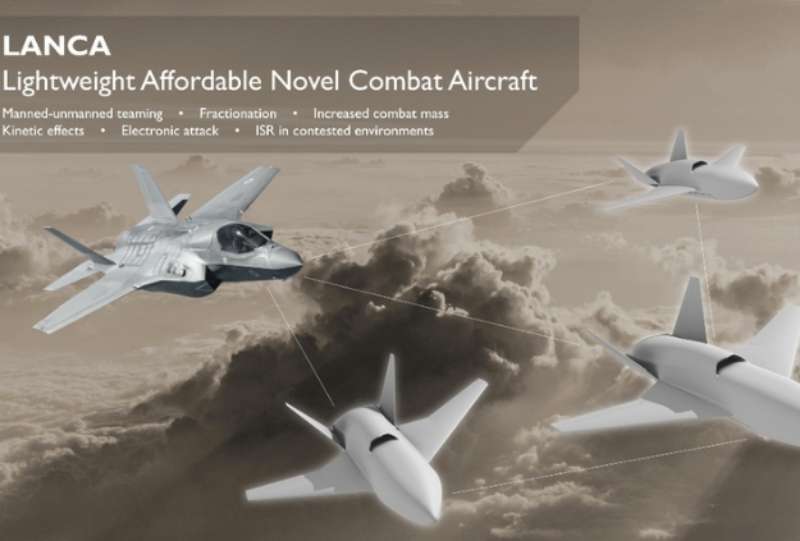 A new project to develop a novel unmanned combat aircraft has been announced by the RAF Rapid Capabilities Office (RCO) and the Defence Science and Technology Laboratory (Dstl). The Lightweight Affordable Novel Combat Aircraft (LANCA) concept looks to offer additional capability, deployed alongside fighter jets like the F-35 and Typhoon – offering increased protection, survivability and information for the manned aircraft – and could even provide an unmanned combat air ‘fleet’ in the future.

Specifically, in a break with traditional approaches for combat air systems in the UK, the innovative LANCA concept aims to deliver dramatic reductions in traditional cost and development timeline.

Under LANCA, a technology demonstrator project known as ‘Mosquito’ has awarded contracts for Phase 1 of the work, which will produce a preliminary system design for an unmanned air vehicle and assessment of the key risk areas and cost-capability trade-offs for an operational concept. Initial flight test of the demonstrator air vehicle could take place as early as 2022.

Phase 1 will include the exploration of novel design, development, prototyping, manufacture, and support, to enable low-cost rapid development and evolution of a potential future unmanned combat air system. Dstl, which provides science and technology for the defence and security of the UK, is delivering the technical oversight, project management, and partnering for Project Mosquito.

LANCA originated in 2015 studies by Dstl to understand innovative Combat Air technologies and concepts that might offer radical reductions in cost and development time. Subsequently LANCA was brought into the RAF RCO as part of the Future Combat Air System Technology Initiative (FCAS TI). LANCA aims to explore the utility and feasibility of unmanned capability adjuncts to existing and future Fast Jet aircraft, specifically those that offer substantial reductions in traditional cost and development timelines.

Project Mosquito has two planned phases. After the 12-month Phase 1, Phase 2 will select up to two of the Phase 1 solutions to further mature the designs, complete manufacturing of the technology demonstrator and conclude with a limited flight-test programme.

The RAF RCO, in partnership with Dstl, is adopting creative approaches to deliver this challenging project. For example, by conducting a competition to access ‘best of breed’, it has enabled non-traditional suppliers to propose their approach to meet the MOD’s ambitious aims. Additionally, subject matter experts within the MOD are assigned as technical partners to each team, supporting industry with technical and operational advice and decisions. This will enhance the opportunity of this game-changing concept in a coherent approach for future combat air systems.