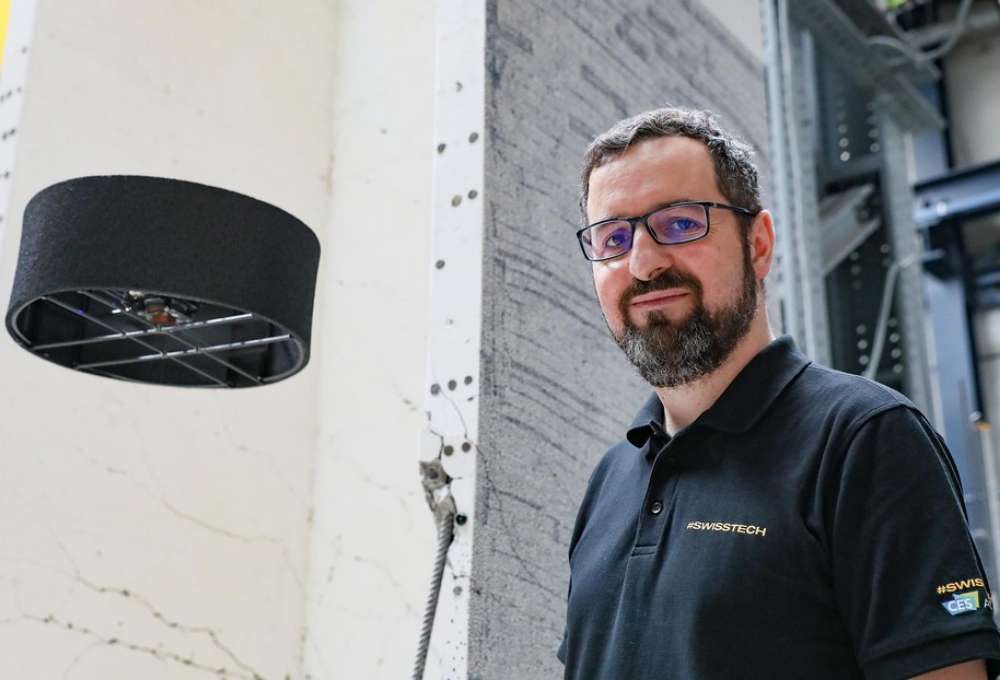 EPFL startup Flybotix has developed a novel drone with just two propellers and an advanced stabilization system that allow it to fly for twice as long as conventional models. That fact, together with its small size, makes it perfect for inspecting hard-to-reach parts of industrial facilities such as ducts.

The main drawback of small drones is their limited flight time, which results from their heavy batteries and relatively inefficient propellers. So for longer missions, a small drone’s battery has to be regularly recharged or replaced. While engineers are working on new designs to address this problem, no real solution has been found – until now.

Samir Bouabdallah, who has over 20 years of experience developing drone technology at EPFL and ETH Zurich, has come up with an inventive propulsion system modeled after those used by helicopters. His design, marketed through his startup Flybotix, uses just two propellers and an algorithm-based stabilization mechanism, giving his drones “the aerodynamic performance of a helicopter and the mechanical stability of a quadcopter.”

Recently in China for the CES Asia conference and the Venture Leaders China program, Bouabdallah has decided to explore opportunities in this promising market.

A drone’s flying time is proportional to its size – the smaller the machine, the less time it can spend in the air. “Drones with four rotors are highly stable, making them reliable and easy to use,” says Bouabdallah. But as these drones get smaller, their propellers become increasingly inefficient. That, combined with their limited battery capacity, explains their abbreviated flying times.

One way to extend those times is to use a completely different kind of propulsion system. By reducing the number of propellers from four to two, for instance, engineers can make each propeller longer and the rotor more efficient. That also cuts the amount of power required, meaning the same-sized battery can run for longer. But until now, drones with two propellers were generally less stable and harder to manipulate. Bouabdallah’s design employs a ring-like structure – around 30 centimeters in diameter – in which the propellers are stacked on top of each other in the center and turn in opposite directions. His drones look more like flying saucers than the machines we’re used to seeing.

Another innovation relates to his drones’ stabilization mechanism. Helicopters use a complicated transmission system that enables pilots to control the blades and maintain the aircraft’s pitch. But this system is heavy, cumbersome and requires a considerable amount of maintenance. However, Bouabdallah has developed an algorithm that offsets the two rotating forces and serves the same function as a helicopter’s transmission system. His drones can therefore be piloted just as easily as quadcopters, using a conventional remote-control device.

Bouabdallah’s drone, with its unique transmission system and foam covering its outer ring, can bounce off of obstacles without breaking. The first application that Flybotix will target is inspecting dangerous or hard-to-reach areas. While in China last month the team got a lot of positive feedback on their technology and made some promising contacts. They hope to soon launch their drones on the Chinese market.