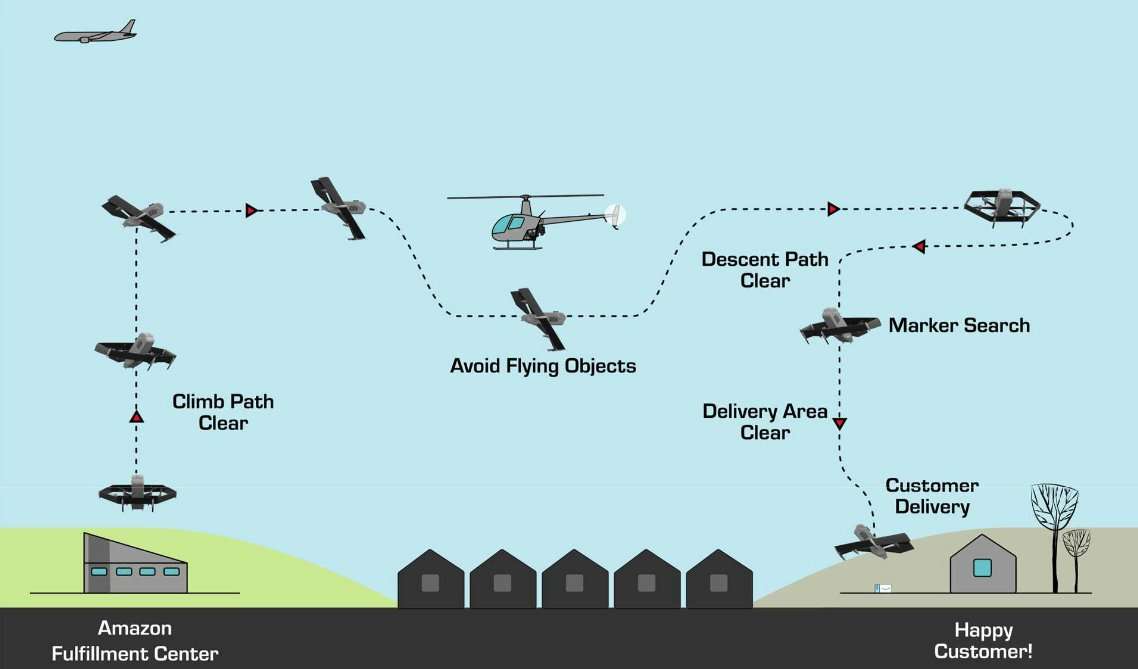 Amazon.com Inc.’s latest drone can avoid a helicopter, but it might cancel a delivery if your dog wanders into the Prime-package drop zone. That’s according to a letter the company sent federal regulators in July seeking the OK to fly its unmanned aircraft to customers’ homes in “sparsely populated” regions of the United States.

The Seattle-based company is asking the U.S. Department of Transportation and the Federal Aviation Administration for several exemptions from federal law and regulations. Top on its list, Amazon seeks permission to fly Prime Air drones for package delivery before receiving an “airworthiness certificate.” Under updated FAA rules, the Secretary of Transportation is allowed to make such an exemption.

Amazon is certain its drones’ decision-making can equal that of a human pilot. The 29-page letter goes into detail about the capabilities and limitations of Amazon’s latest drone that would be making these inaugural shipments, MK27. Most notably, while human “operators” will monitor flights and can order the drone return at any point during a shipment, MK27 programing will use “fail-safe logic” to make decisions that Amazon employees can’t override.

“Prime Air is confident our autonomous systems will achieve demonstrable levels of safety and reliability equivalent to operations that currently rely on certificated airmen with manned flight experience,” the letter reads.

Allowing Amazon to deliver packages by MK27 “would be in the public interest,” according to Sean Cassidy, Prime Air’s director of safety and regulatory affairs. The company’s drone program would reduce long-term wear on roads, lessen the environmental impact caused by parcel delivery and further advance unmanned aircraft technology, he wrote in the letter to the government.

His letter did not reveal a timetable or name where MK27 might deliver packages, only that the company would take a “measured and iterative” approach by “starting initially with flights over select sparsely populated areas and expanding as our proficiency develops.” It almost certainly won’t be around Amazon’s second headquarters in Arlington, which is squarely within a no drone zone.

The battery-powered drone would deliver packages within 30 minutes after the customer places the order, but only to Prime customers about 8.5 miles away from the Amazon fulfillment center that deployed it — a round trip of 15 nautical miles.

Initial flights will still be overseen by an operator with an FAA airman certificate and a class III medical certificate. Amazon can command the drone to return to base at any point during the flight. But Amazon thinks the operators likely won’t be needed, as the drones will be able to maneuver around flying objects using onboard sensors. MK27 can even land itself in the event of communication loss, Cassidy wrote.

“The MK27 is designed to perform an automated response maneuver to ensure separation from other aircraft and objects and that a safe landing will occur without the need for any operator intervention in the highly unlikely event of a complete lost link situation,” per the letter. “The MK27 is independently safe in that regard.”

MK27 won’t actually land when delivering a package. The drone would find the delivery area by looking for a “unique marker,” descend to a “delivery height,” hover and drop the package provided nothing gets in the way.

But if someone or something meanders into the drop zone, the nearly 88-pound drone could leave without delivering the package. Amazon describes this as its “fail-safe logic.”

“Our system is designed with default fail-safe logic to abort the delivery if an obstruction is detected,” Cassidy wrote.

And once the drone decides to cancel, that’s it. Prime employees wouldn’t be able to make the drone deliver the package even if they wanted to.

In the event of an accident, Amazon also has a drone “emergency response plan” with staff working 24-hours every day. That said, Prime Air would only fly during the “daytime,” according to the letter.

Amazon plans to fly the drone 400 feet max, though MK27 can reach three times that if need be. It won’t fly over hospitals, “sensitive government facilities” and football stadiums or any sporting event. It won’t take off if winds read above 24 knots or under “icing conditions.”

The drone has completed more than 10,000 “real-world datasets accomplished via flights in representative backyard locations.” The hardware has gone through some 15,000 simulated tests, and the software more than 250,000, the letter said.

MK27 is heavier than previous models. Amazon’s MK24, a prototype which sought FAA test approval in 2015, weighed no more than 55 pounds, according to records obtained in a Freedom of Information Act Request.

The MK27 appears to have similar markings and characteristics of the drone presented to the public in June.