Drones Help Farmers Save an Endangered US River

Startseite/Drones Help Farmers Save an Endangered US River 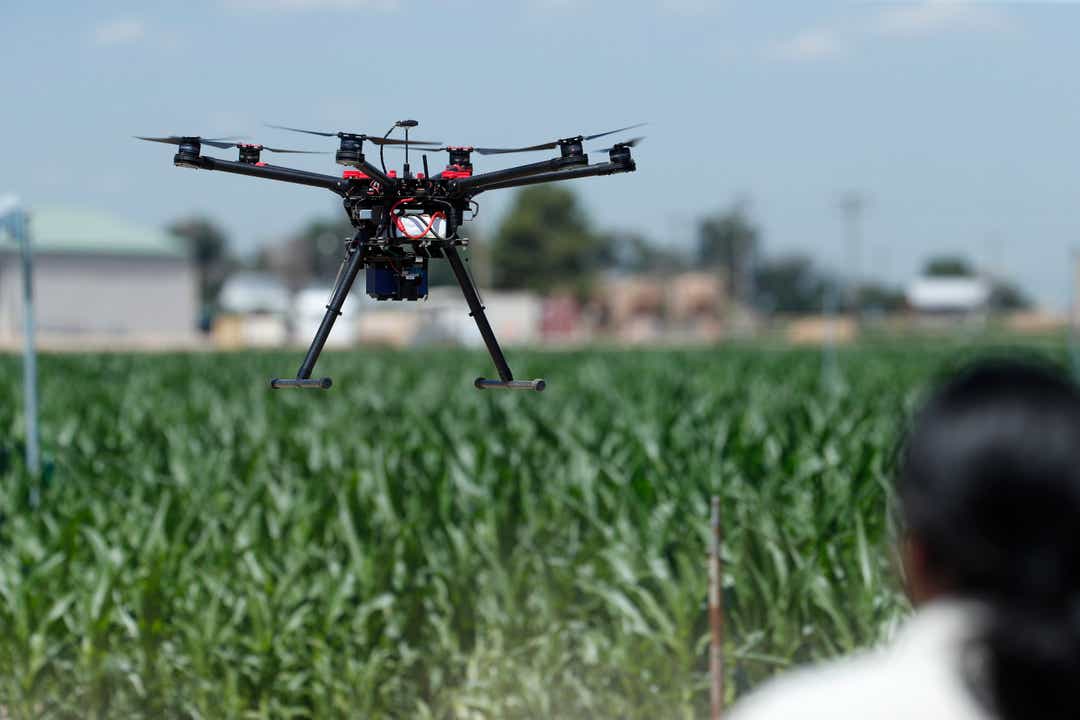 United States Department of Agriculture engineering technician Kevin Yemoto guides a drone into the air at a research farm northeast of Greeley, Colorado

A drone soared over a blazing hot cornfield in northeastern Colorado on a recent morning, snapping images with an infrared camera to help researchers decide how much water they would give the crops the next day.

After a brief, snaking flight above the field, the drone landed and the researchers removed a handful of memory cards. Back at their computers, they analyzed the images for signs the corn was stressed from a lack of water.

This Department of Agriculture station outside Greeley and other sites across the Southwest are experimenting with drones, specialized cameras and other technology to squeeze the most out of every drop of water in the Colorado River – a vital but beleaguered waterway that serves an estimated 40 million people.

Remote sensors measure soil moisture and relay the readings by Wi-Fi. Cellphone apps collect data from agricultural weather stations and calculate how much water different crops are consuming. Researchers deliberately cut back on water for some crops, trying to get the best harvest with the least amount of moisture – a practice called deficit irrigation.

In the future, tiny needles attached to plants could directly measure how much water they contain and signal irrigation systems to automatically switch on or off.

“It’s like almost every month somebody’s coming up with something here and there,” said Don Ackley, water management supervisor for the Coachella Valley Water District in Southern California. “You almost can’t keep up with it.”

Researchers and farmers are running similar experiments in arid regions around the world. The need is especially pressing in seven U.S. states that rely on the Colorado River: Arizona, California, Colorado, Nevada, New Mexico, Utah and Wyoming. 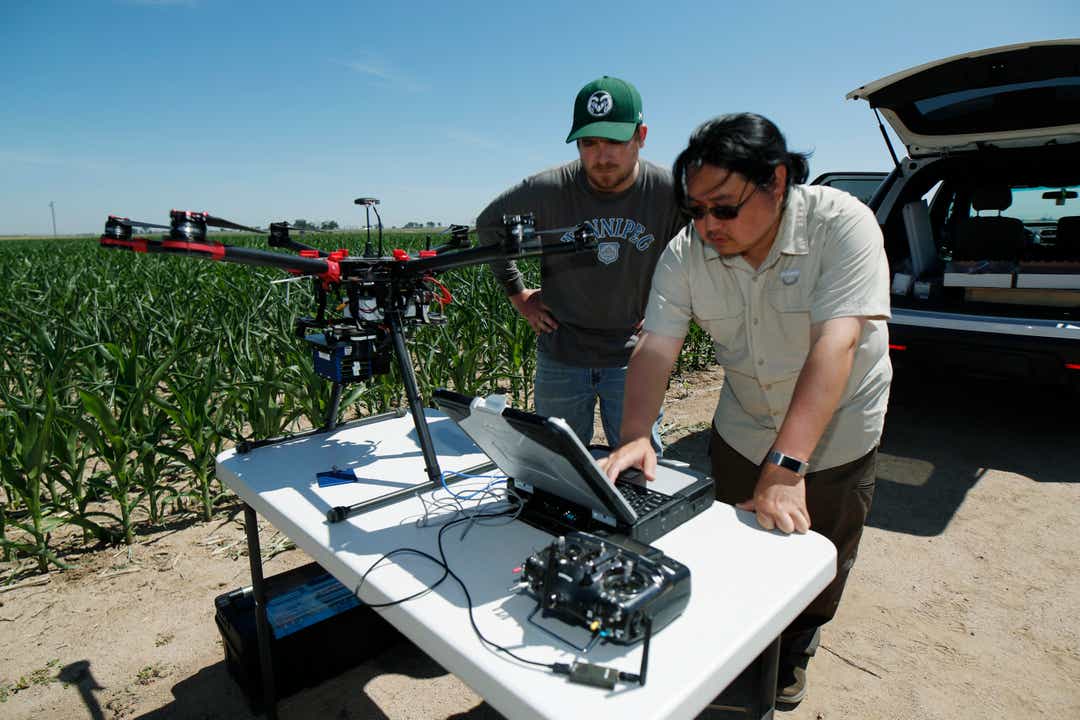 United States Department of Agriculture intern Alex Olsen, left, and engineering technician Kevin Yemoto work to set up a drone for flight over a research farm northeast of Greeley, Colorado

The river has plenty of water this summer after an unusually snowy winter in the mountains of the U.S. West. But climatologists warn the river’s long-term outlook is uncertain at best and dire at worst, and competition for water will only intensify as the population grows and the climate changes.

The World Resources Institute says the seven Colorado River states have some of the highest levels of water stress in the nation, based on the percentage of available supplies they use in a year. New Mexico was the only state in the nation under extremely high water stress.

The federal government will release a closely watched projection Thursday on whether the Colorado River system has enough water to meet all the demands of downstream states in future years.

The river supplies more than 7,000 square miles of farmland and supports a $5 billion-a-year agricultural industry, including a significant share of the nation’s winter vegetables, according to the U.S. Bureau of Reclamation, which manages most of the big dams and reservoirs in the Western states.

The Pacific Institute, an environmental group, says the river also irrigates about 700 square miles in Mexico. 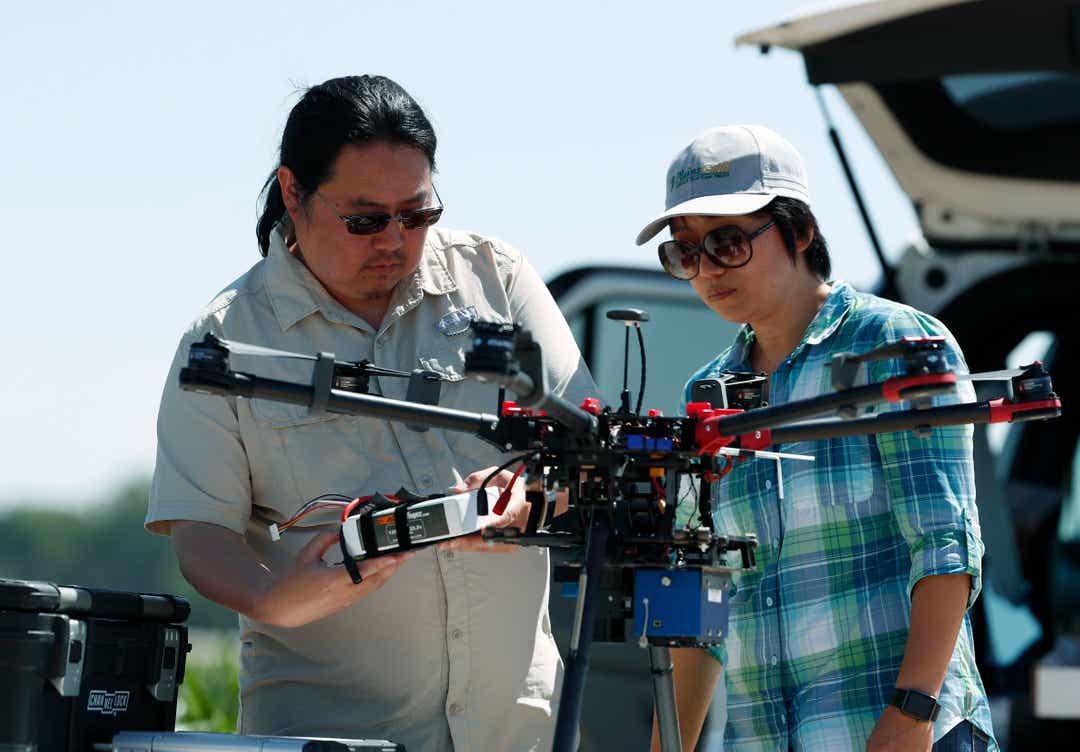 United States Department of Agriculture engineering technician Kevin Yemoto, left, loads a camera into a drone as Huihui Zhang looks on at a research farm northeast of Greeley, Colorado

Agriculture uses 57% to 70% of the system’s water in the U.S., researchers say. The problem facing policymakers is how to divert some of that to meet the needs of growing cities without drying up farms, ranches and the environment.

The researchers’ goal is understanding crops, soil and weather so completely that farmers know exactly when and how much to irrigate.

“We call it precision agriculture, precision irrigation,” said Huihui Zhang, a Department of Agriculture engineer who conducts experiments at the Greeley research farm. “Right amount at the right time at the right location.”

The Palo Verde Irrigation District in Southern California is trying deficit irrigation on alfalfa, the most widely grown crop in the Colorado River Basin.

Alfalfa, which is harvested as hay to feed horses and cattle, can be cut and baled several times a year in some climates. The Palo Verde district is experimenting with reduced water for the midsummer crop, which requires more irrigation but produces lower yields.

Sensors placed over the test plots indirectly measure how much water the plants are using, and the harvested crop is weighed to determine the yield. 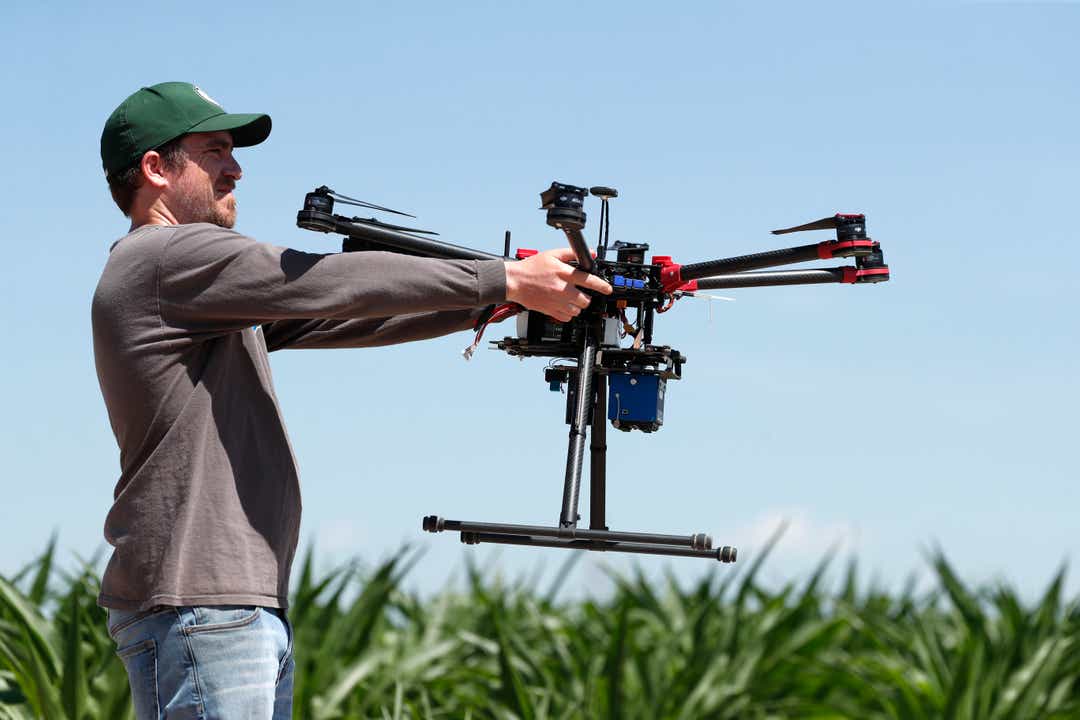 United States Department of Agriculture intern Alex Olsen prepares to place down a drone at a research farm northeast of Greeley, Colorado

Blaine Carian, who grows grapes, lemons and dates in Coachella, California, already uses deficit irrigation. He said withholding water at key times improves the flavor of his grapes by speeding up the production of sugar.

He also uses on-farm weather stations and soil moisture monitors, keeping track of the data on his cellphone. His drip and micro-spray irrigation systems deliver water directly to the base of a plant or its roots instead of saturating an entire field.

For Carian and many other farmers, the appeal of technology is as much about economics as saving water.

“The conservation’s just a byproduct. We’re getting better crops, and we are, in general, saving money,” he said.

But researchers say water-saving technology could determine whether some farms can stay in business at all, especially in Arizona, which faces cuts in its portion of Colorado River water under a drought contingency plan the seven states hammered out this year.

Drone-mounted cameras and yield monitors – which measure the density of crops like corn and wheat as they pass through harvesting equipment – can show a farmer which land is productive and which is not, said Ed Martin, a professor and extension specialist at the University of Arizona.

“If we’re going to take stuff out of production because we don’t have enough water, I think these technologies could help identify which ones you should be taking out,” Martin said.

Each technology has benefits and limits, said Kendall DeJonge, another Agriculture Department engineer who does research at the Greeley farm.

Soil moisture monitors measure a single point, but a farm has a range of conditions and soil types. Infrared images can spot thirsty crops, but only after they need water. Agricultural weather stations provide a wealth of data on the recent past, but they can’t predict the future.

“All of these things are tools in the toolbox,” DeJonge said. “None of them are a silver bullet.”