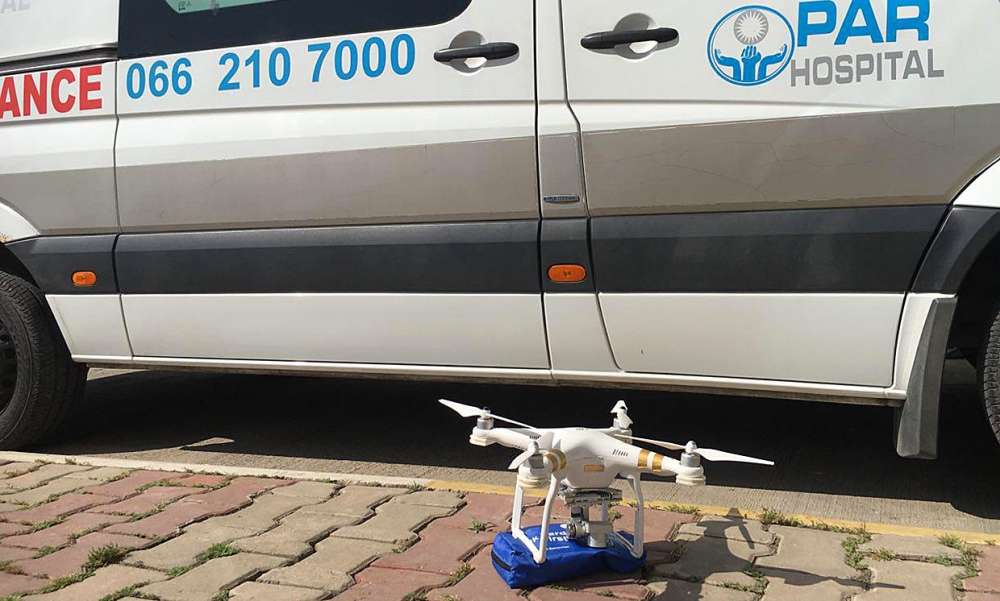 A team in Iraq and Australia has developed another way to use drones in healthcare—as part of a system that detects when an elderly person has fallen, then delivers first aid.

Described in the journal Sensor, the drone system successfully reached every fake test patient in a busy city in northern Iraq, and arrived 90 to 120 seconds faster than an ambulance.

“That may not sound like a really long time, but if you weren’t breathing or your heart had stopped during that 90 seconds, it would seem like a very long time,” says co-author Javaan Chahl, a professor of sensor systems at the University of South Australia. “In that sort of emergency, the sooner a response, the better the outcome is going to be.”

Chahl imagines drone systems like this one could respond to many types of medical emergencies. The drones in this study carried a small first aid kit, but the package could instead be a portable defibrillator or medications like an EpiPen, Chahl adds. Of course, another person would need to be on hand to administer the aid, and the system currently only works outdoors.

In 2017, Chahl’s team used drones to detect vital signs in people from the air, even while the people were moving. In the current work, Chahl and engineer Ali Al-Naji collaborated with engineers at Middle Technical University in Baghdad, Iraq, led by Sadik Gharghan, who had built and tested a wearable device that monitors heart beat and acceleration, then analyzes that data with an algorithm to detect a physical fall.

The collaborators tested their fall detection device (FDD) in five healthy volunteers performing normal physical activity and a variety of falls—including falling forward, backward, or onto one’s knees—both normally and with an accelerated heart rate (achieved by running on a treadmill prior to the fall). Overall, the FDD detected 98 percent of falls with more than 99 percent accuracy.

The FDD, made up of a microcontroller and two bio-sensors (for heart rate and acceleration), was then equipped with a GPS module to track location and a GSM module to send notifications to a caregiver’s smartphone. In tests across three cities in Iraq, the FDD successfully relayed messages and GPS locations of fall positions to caregiver smartphones.

Finally, the team put the system to the ultimate field test—drone versus ambulance.

They didn’t make it easy on themselves: The researchers placed fake patients in crowded, difficult-to-access locations in Erbil, Iraq, including in a residential neighborhood near a school and in a city center near a popular market.

When alerted to a fall by the FDD, caregivers used their smartphones to pick a path to the fake patient, packed up the drone with a first aid kit, and sent it off. They simultaneously alerted an ambulance, and calculated the time it took for each responder—drone and ambulance—to arrive at the fake patient’s location.The drone successfully and safely arrived at each location before the ambulance, with an average time savings of 105 seconds.The research team received approval from Iraqi authorities for the field test. Such an experiment might not currently be permitted in the United States or Australia, especially in metropolitan areas, due to drone regulations and safety concerns, says Chahl. In July, the Swiss Post grounded its hospital delivery drones after two crashes.

Now, the team plans to work on prolonging the FDD’s battery life and improving the system so that no human intervention is necessary to launch the drone. A robot loading and launching the drone could shave 5 to 10 seconds off delivery time, says Chahl. And a faster drone, rather than the off-the-shelf model used in this study, could shave off a total of 30 to 40 seconds, he adds. “It could end up being three times faster than an ambulance.”