Bee boxes sit to the west of Clark Coleman’s sunflower field north of Bismarck. Honey bees play a vital role in pollinating sunflowers, helping increase yield and quality. But up until now, the bees have been placed nearby and farmers hope for the best. “Bees pollinate, but they don’t know where,” explains Kate Lyall, who owns and operates Australian agriculture technology company Bee Innovative with her husband, David.

Bee Innovative believes it may have an answer that could increase profitability for farmers and make better use of a dwindling resource — honey bees.

According to the Bee Informed Partnership, 37.7% of managed honey bee colonies were lost during the 2018-19 winter — the highest level since the partnership began surveying winter loss after the winter of 2006-07. While problems with colony collapse disorder — when the majority of worker bees leave a colony — have lessened to an extent in recent years, concerns about overall bee health continue.

Those concerns have led researchers to consider whether technology can play a part in pollination. For some researchers, that means looking into whether technology can replace bees. Harvard researchers have created RoboBees, insect-sized flying robots, and about a year ago, they found ways for the robots to fly untethered from power supplies. Numerous researchers are seeking ways to use tiny drones for means of artificial pollination. Walmart filed a patent for a system for “pollinating crops by unmanned vehicles.”

“I think this is a better option because it’s using what’s already in the natural landscape,” Lyall says. “We’re just making better use of that commodity”. 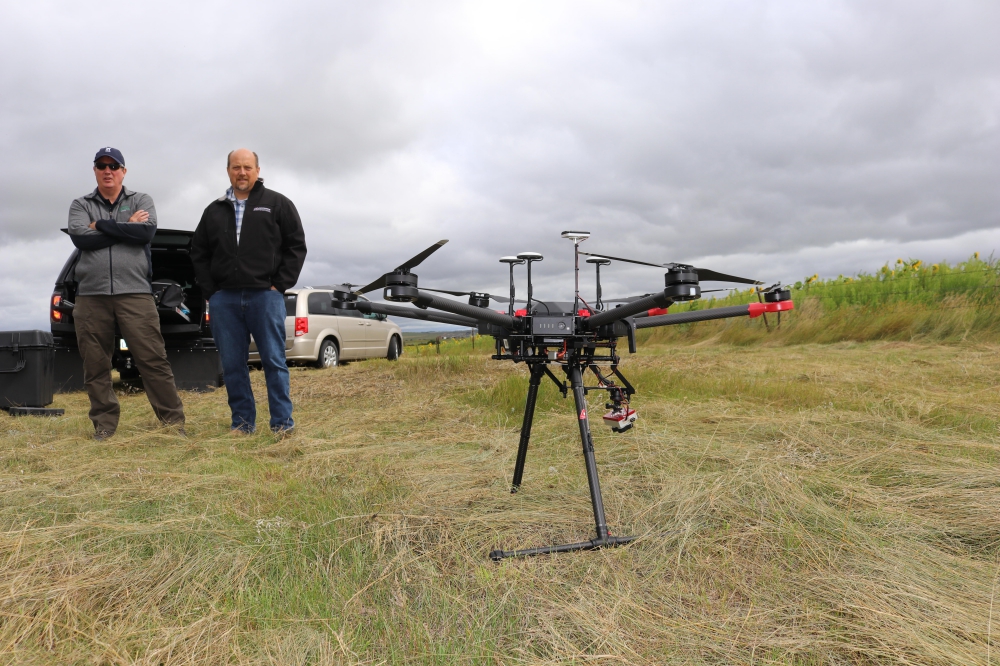 In August, the Lyalls brought their radar-like technology to North Dakota. Lyall explains the device they created emits an energy signal that can see where bees are and where they’re not. Using that data, they work with beekeepers to bring in more bees, strategically placed for where the field hasn’t been pollinated.

“It’s about providing the farmer with data that they currently don’t have,” Lyall says.

Bee Innovative started using the technology in Australian blueberry and raspberry fields. The blueberries saw increases in both yield and quality, as well as 80% less waste, and more of the blueberries were considered a premium, rather than standard, product, Lyall says.

“We’ve had amazing results,” she says.

Trying out their BeeDar technology in expansive sunflower seeds should be easier than in the smaller fruit fields, because the blueberries often are under netting, Lyall says. Bee Innovative will compare two nearly identical sunflower fields during the course of the study. To do so, they need to use larger drones and are relying on expertise from the University of North Dakota.

Bee Innovative came to North Dakota through a partnership with UND and a $59,113 grant from the North Dakota Agricultural Products Utilization Commission. The UND Aerospace School is providing an additional $10,000 for personnel and equipment. UND’s Center for Innovation is assisting Bee Innovative with incorporating as a North Dakota business.

UND has a cross disciplinary team working with the Lyalls. Mark Askelson, executive director of Research Institute for Autonomous Systems and faculty with the Atmospheric Sciences Department at UND Aerospace, will be monitoring the micro-climate of the fields. Dr. Haochi Zheng of the Earth System Science and Policy Department at UND Aerospace will be tracking bee health and analyzing the economic impact of the use of technology and the impact on farming. Paul Snyder, the assistant chairman and director of the unmanned aerial systems program in the Aviation Department at UND Aerospace is the principal investigator on the project and will be conducting crop health monitoring using UAS technologies. James Moe, assistant chief Instructor of the UAS Program, is providing expertise in UAS flight and crop health monitoring using UAS.

The Lyalls say they searched the world for knowledge on unmanned aerial systems and landed on UND as the most knowledgeable place.

Snyder says UND’s programs seek to solve problems for industry and they are excited to see where the Bee Innovative partnership leads.