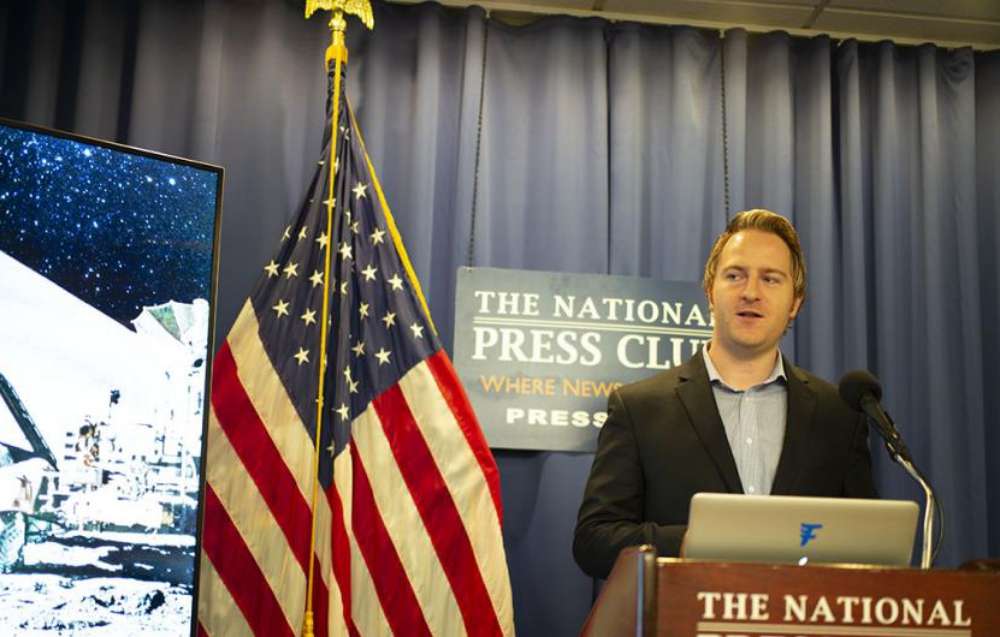 Drone delivery pioneer Flirtey announced a new cargo-carrying drone and a launch platform that it says will help it begin commercial drone deliveries next year.

“I’m here to tell you that a new age of technology is dawning and it is being driven by mission-driven technology startups,” Flirtey CEO and cofounder Matt Sweeny said at a press conference Monday morning at the National Press Club.

“We protect data, we defend the privacy of our customers, we empower our partners, we manufacture in America, we reduce traffic congestion and we reduce carbon emissions and we work hand in hand with the communities who want drone delivery.”

Sweeny announced the Eagle, a new Flirtey delivery drone, which he said has “more than double” the carrying capacity than its rivals, although he wouldn’t say what that was and declined to provide its range. The Eagle would lower packages to the ground using a tether.

He also announced the Flirtey Portal, a launch and landing platform sized to fit in a normal vehicle parking space.

That technology — combined with autonomous flight software that Sweeny said has earned approval from the Federal Aviation Administration to allow one operator to control 10 aircraft — means Flirtey Eagles could operate from mom and pop storefronts across America.

“The future is here now, and here it is,” he said.

Flirtey’s idea is to dispense with flights from large distribution centers and instead allow small companies to get in on the rapid drone delivery game, with company providing the delivery service.

Small stores can have on-demand deliveries sent to nearby homes in 10 minutes or less, which enables them to compete with delivery giants such as Amazon, he said.

“And so drone delivery is a unique tool that will help reinvigorate middle America, small businesses and drive sales for customers who can now have hyper-local deliveries placed,” he said.

Flirtey is part of the Reno, Nevada-based Integration Pilot Program that has explored using drones to deliver defibrillators.

“When you look up into the sky and see a Flirtey delivery drone, it could be on its way to delivering a defibrillator to save a life,” Sweeny said.

The company is seeking a type certification for the Eagle, which certifies it’s safe to fly, and production certification, which allows it to mass produce them. The company will also need a Part 135 certification from the FAA to conduct commercial operations, and Sweeny said the company has already taken a stake in startup drone operator that is seeking Part 135 approval.

“People within the IPP expect to obtain the Part 135 in 2020,” he said. “So that means not only will the regulations enable commercial operation, they will enable Flirtey to provide our aircraft and now autonomous software platform to those who wish to operate it.”