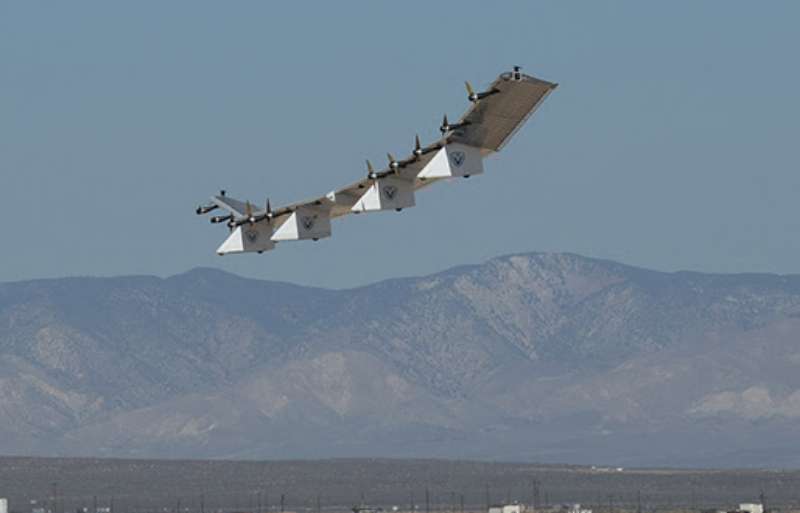 “The first flight of HAWK30 builds on more than two decades of pioneering HAPS technology development and demonstration by the AeroVironment team, and comes only two years since SoftBank joined us in this endeavor,” said Wahid Nawabi, AeroVironment president and chief executive officer.  “We are the pioneer and leader in HAPS, delivering continued progress and demonstrated success.  We look forward to achieving even greater success in flight testing, culminating in high-altitude, long-endurance flight demonstrations that will pave the way for the global commercialization of HAPS technology.”

“We are grateful for the expertise and support from NASA’s outstanding team at the Armstrong Flight Research Center.  We are proud to add another milestone to their storied history of aviation innovation,” Nawabi added.

Developed and assembled in AeroVironment’s HAPS Innovation Center, the HAWK30 has a wingspan of approximately 260 feet and is propelled by 10 electric motors powered by solar panels covering the surface of the wing, resulting in zero emissions. Flying at an altitude of approximately 65,000 feet above sea level and above the clouds, the HAWK30 is designed for continuous, extended missions of up to months without landing.

AeroVironment seeks to create value from its unique HAPS intellectual property and capabilities in multiple ways: participating in the anticipated growth of the HAPSMobile joint venture as one of its two owners; generating customer-funded research and development revenue as the exclusive developer of solar HAPS for HAPSMobile through the design, development and demonstration phases of the program; manufacturing and supplying HAPS UAS to HAPSMobile; supporting and maintaining a deployed fleet of HAPS systems; and marketing and selling HAPS UAS to non-commercial customers globally, with the exception of Japan.

AeroVironment pioneered the concept of high-altitude solar-powered UAS in the 1980s, and developed and demonstrated multiple systems for NASA’s Environmental Research Aircraft and Sensor Technology, or ERAST program, in the late 1990s and early 2000s. In August 2001, the AeroVironment Helios prototype reached an altitude of 96,863 feet, setting the world-record for sustained horizontal flight by a winged aircraft. In 2002, the AeroVironment Pathfinder Plus prototype performed the world’s first UAS telecommunications demonstrations at 65,000 feet by providing high-definition television (HDTV) signals, third-generation (3G) mobile voice, video and data and high-speed internet connectivity.