Mina was born in the city of Bonab in East Azarbaijan province in 1978. She studies aerospace at Sharif University of Technology and plans to go to a foreign country to receive a master’s degree because “this field in Iran is not suitable for women.”

“At high school, I participated with my classmates in glider competitions at Sharif University of Technology and got acquainted with the aerospace at this great university,” Mina told Fars News Agency.

“Of course, many people consider this field as male-oriented, but I disagree with it. I thought about everything, including the job market before choosing the major. I came to the conclusion that if I cannot find a job in Iran, I will not feel down and will go to other airlines to find a job.”

“Last year, as part of a team from Sharif University, we participated in the AIAA competitions, but could not win any title; however the competition had three other sections that people can take part individually. Therefore, I participated individually in these competitions and submitted the necessary reports to them in May. I eventually received an email after being judged by expert engineers from major companies in the world announcing that my proposal has ranked first,” she added.

“When I received the email it was mentioned at the end that they could not send me the 1,000 USD prize because of the sanctions and I was upset. Of course, they had announced that team members could travel to the United States to elaborate on their plan, but I have not received such an email yet.”

Referring to the benefits of the proposed plan, she said the plan proposed in this section was to design an unmanned aerial system for inspection of 150 miles of power transmission lines in one day. 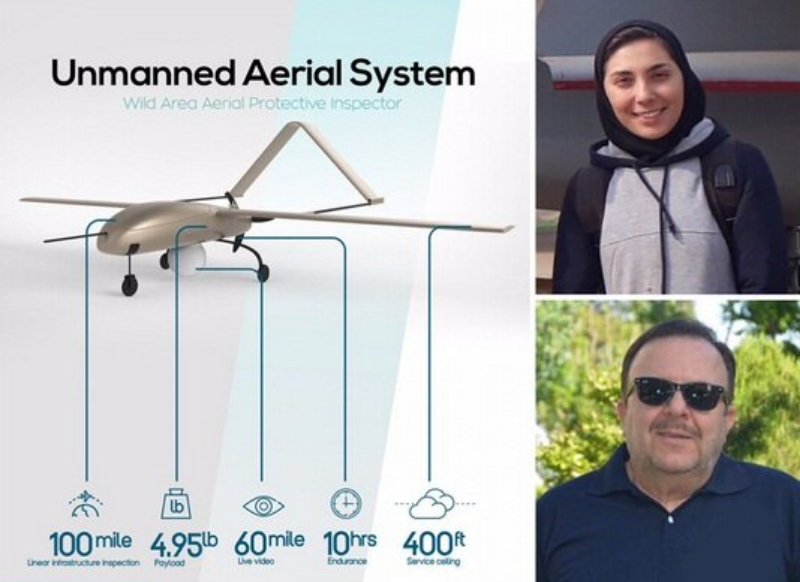 “The system to be designed should have lower costs than current methods for conducting higher power lines and more security in comparison with other unmanned aerial systems.”

Fat’hi said that although sanctions have created a lot of problems for Iranian airlines, there are still many experts who put the airlines in good and safe conditions.

The American Institute of Aeronautics and Astronautics (AIAA) is a professional society for the field of aerospace engineering. The AIAA is the US representative on the International Astronautical Federation and the International Council of the Aeronautical Sciences. In 2015, it had more than 30,000 members among aerospace professionals worldwide.

The AIAA annually holds design competitions and Design/Build/Fly competitions to provide a real-world design experience for engineering students, both undergraduate and graduate, by giving them the opportunity to validate their analytic studies.