On October 18, in a first for drone delivery in the U.S., Wing is delivered packages, over-the-counter medication, snacks and gifts to residents of Christiansburg, Virginia.

With an expanded Air Carrier Certificate from the Federal Aviation Administration (FAA), Wing today became the first company to operate a commercial air delivery service via drone directly to homes in the United States. Wing’s FAA permissions are the first to allow multiple pilots to oversee multiple unmanned aircraft making commercial deliveries simultaneously to the general public, paving the way for the most advanced drone delivery service in the nation.

Wing’s collaborators on this service — FedEx Express, Walgreens, and local Virginia retailer Sugar Magnolia — are the first businesses in the United States to offer this form of local air delivery to customers. FedEx is completing the first scheduled e-commerce drone delivery in American history today, and becomes the first company in the United States to connect online retailers to last-mile drone delivery services. Building on a heritage of innovation, today Walgreens is also making aviation history by completing the first on-demand, commercial drone delivery directly to a home in the U.S. Through this pilot, Walgreens will be the first U.S. retailer to provide customers with on-demand drone deliveries of over-the counter medications and convenience items.

Minutes after our customers order from the Wing app from Walgreens or local Virginia retailer Sugar Magnolia, our lightweight aircraft delivers directly to their homes. Similarly, customers can opt in to receive scheduled FedEx Express deliveries by drone. Upon arrival, the aircraft gently lowers the package to a small, designated location in the yard or driveway, before returning to Wing’s “Nest” in North Christiansburg.

Christiansburg resident Paul Sensmeier ordered a birthday gift for his wife Susie that was scheduled for delivery via FedEx Express. The last mile of the delivery, normally done by truck, is being done via the Wing drone. The Sensmeiers have been married for fifty years, and come from a family of engineers and medical professionals.

“We’re always excited about new things,” Paul told us. Wing’s newness piqued their interest, as did the convenience: “It’s not always easy getting up and getting out,” says Susie. “Paul broke his leg in June. We know what it’s like to feel stuck sometimes.” 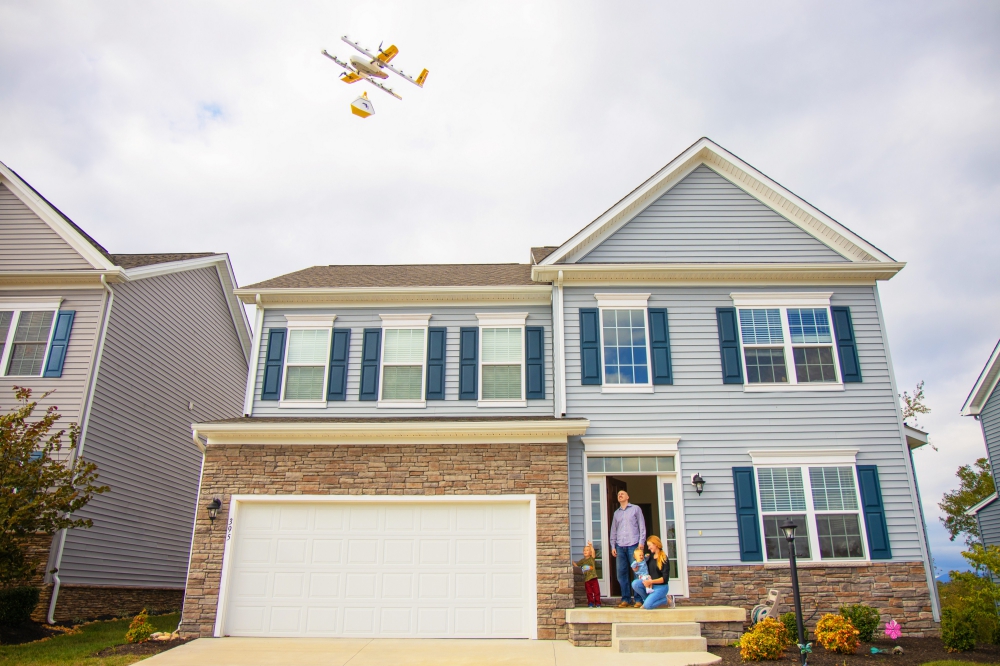 Nearby, in another first for unmanned aviation in the U.S., Michael Collver and his wife Kelly are ordering a cough and cold pack from Walgreens, complete with Walgreens-brand Nice! tissues and bottled water, Tylenol, Halls cough drops and Emergen-C.

“Usually, every time you need something like Tylenol, that’s another car on the road,” said Michael. “It’s a hassle. With Wing, the kids love it, it keeps that car off the road, and it’s good for the planet too.” Kelly and Michael met as graduate students in biology, and Michael teaches at a local high school where he also coaches a competitive robotics team. “Wing is perfect. This is the professional outcome of what I’m doing with these kids.”

Wing would like to thank the residents of Christiansburg, and the Mid-Atlantic Aviation Partnership for being a part of this moment in aviation history. We would also like to thank the U.S. Federal Aviation Administration and the Department of Transportation for making this operation possible.