Over the summer, the Air Force Armament Museum’s P-51 Mustang got its first new paint job in more than 30 years.  And not a single drop of paint was used in the process. That is because the P-51 became the first Air Force museum aircraft to be completely wrapped in vinyl.

The wrapping was another idea greenlit by iSpark and the 96th Test Wing innovation office.

David Fitzpatrick, the museum’s director, wanted to vinyl wrap an outdoor aircraft display’s canopy so it would resemble glass.  Typically, the canopies are painted black or grey.

That idea blossomed to wrapping the missiles hanging off the aircraft, then spot color to eventually ‘why not wrapping the entire display’ in the waterproof vinyl.  Vinyl wrapping frequently gets used on yachts, luxury vehicles and racecars and advertising vehicles instead of paint.

This big idea required Air Force approval first, which Fitzpatrick got, along with a keen interest from higher headquarters in the outcome.

Now with the approvals, Fitzpatrick had to figure out how to pay for it.  Former wing commander, Brig. Gen. Evan Dertien, recommended iSpark.  It was an easy decision when the innovation team heard the pitch.  They immediately funded the wrapping project.

Fitzpatrick chose to wrap the P-51 because the museum’s indoor aircraft displays could not painted in place without closing the facility or taking them apart completely.  The aircraft was a matte grey and did not match what a typical P-51 looked like when originally flown – normally a requirement for a display.

Fitzpatrick not only wanted to wrap the display in vinyl, but he also wanted to change the colors to match the Tuskegee Airmen Red Tail fighter flown by Charles Bailey.

Bailey completed his gunnery training here and went on to fly 133 combat missions over enemy territory and is credited with the Distinguished Flying Cross, the Air Medal, Four Oak Clusters, and the Presidential Unit Citation.

The Tuskegee aircraft tails were painted red so they could identify each other in flight and because the bright red paint was the only thing made available to the African American Airmen at the time. 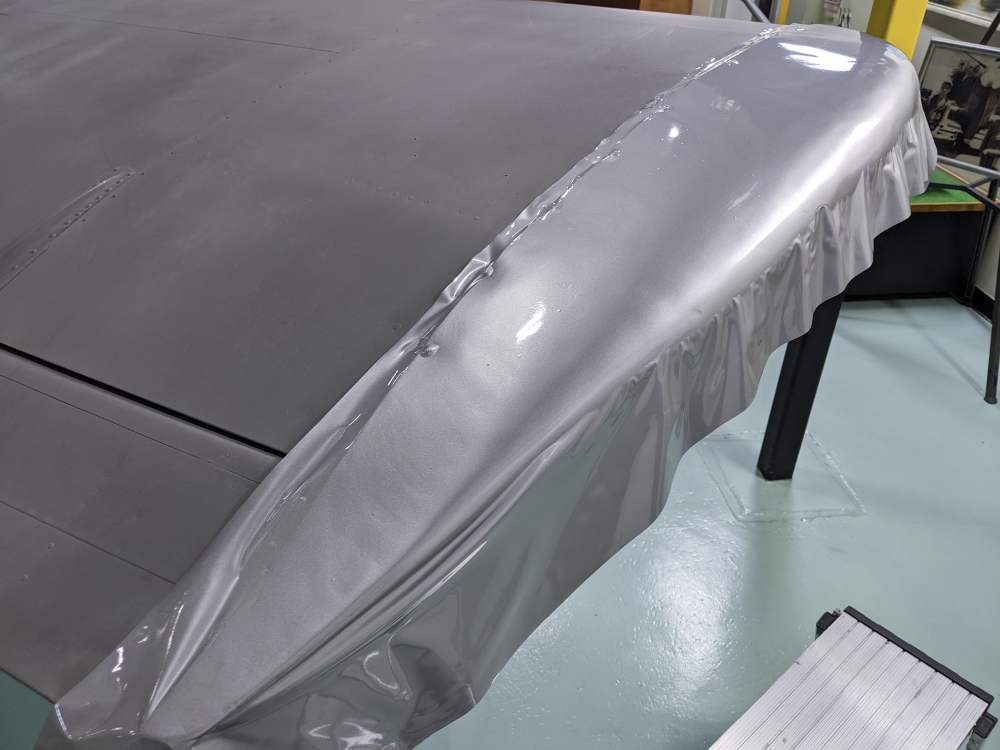 The wrapping contract went to Gary Householder and the local Fried Color Graphics and in Fort Walton Beach and the work began in June.

“It’s always fun to work on something different,” said Householder, who had never wrapped an aircraft before this.  “It was exciting to be part of this involving the Red Tail.”

Typically, a new brush-roll paint job for an outdoor aircraft takes a three-person volunteer crew approximately three months to complete.  The brush roller also creates a textured, messy look and does not last long, according to Fitzpatrick.

Householder, who did all the work himself, wrapped the entire P-51 in only 10 days.  It may have been quicker, but his work drew interest from the museum’s many summertime visitors.  He frequently had an audience and was asked questions about his work and the museum itself.

“Whenever I’m working on a wrap, people tend to like to watch,” said Householder.  “This time, they just thought I was a museum employee.”

Now complete, the Red Tail Mustang gleams in the fluorescent lights of the museum.  The formerly grey and black plane now boasts bright reds, whites, blues and yellows … and not a drop of paint was spilled.

“It came out better than expected,” said Fitzpatrick.  “We are very happy with the results.”

Armed with those results and the project’s success, Fitzpatrick plans to re-apply with iSpark for funding to wrap an outdoor vintage and modern aircraft display during this fiscal year.