A drone with a machine gun attached can hit targets with high precision, according to its makers. Turkey is set to become the first country to have the drone, when it gets a delivery this month. The 25-kilogram drone has eight rotating blades to get it in the air. Its machine gun carries 200 rounds of ammunition and can fire single shots or 15-round bursts.

The new drone, called Songar and made by Ankara-based electronics firm Asisguard, is the first drone to be equipped with a firearm and be ready for service. Turkey expects the drones to be delivered before the end of the year.

It is hard for a drone to shoot accurately, partly because of the difficulty of judging range and angle, and partly because the recoil from each shot significantly moves the drone, affecting the aim for the next round.

Songar has two systems to overcome these challenges. One uses sensors, including cameras and a laser rangefinder, to calculate distance, angle and wind speed, and work out where to aim. The second is a set of robot arms that move the machine gun to compensate for the effects of recoil.

Asisguard claims Songar has an accuracy that corresponds to hitting a 15-centimetre area from 200 metres. That is accurate enough for every bullet to hit a human-sized target at that range. A human drone pilot picks the target by putting cross hairs on it using a screen on a remote control.

Asisguard says improvements to Songar’s accuracy mean it will soon be able to hit targets from more than 400 metres away.

Songar has night sensors for operating in darkness and has a range of 10 kilometres. It may also operate in groups. Ayhan Sunar at Asisguard says a swarm of three Songar can be flown using a single remote control, with all three firing at a target simultaneously. 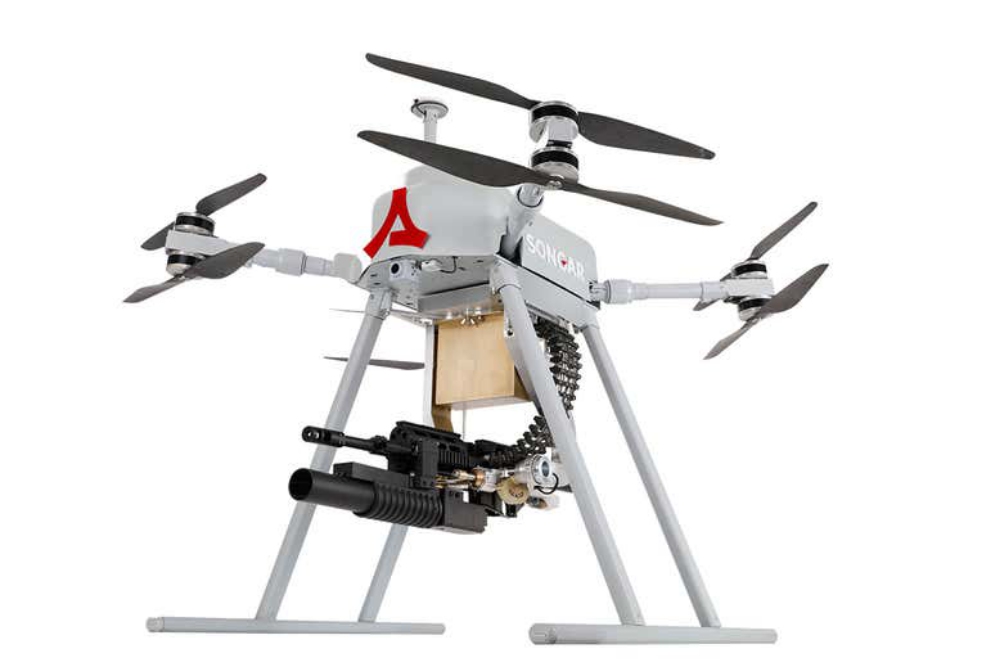 Drones are extremely hard to stop. There is a concern that armed groups could copy the technology and produce their own improvised versions, says Robert Bunker at the US Army’s Strategic Studies Institute in Pennsylvania.

Songar may also open up new uses for drones, says Bunker. For example, he says that machine-gun drones could lay down suppressive fire to keep defenders’ heads down while other drones carry out attacks on more substantial targets such as infrastructure or vehicles.