Braving the Eye of the Storm

The most dangerous part of the hurricane is the eyewall close to the ocean. It’s where the storm draws energy from heat in the water, which influences how strong – and how quickly – the storm will develop. It’s also where the strongest winds lurk.

Direct and continuous observations of the lower eyewall would help forecasters understand critical information about the storm’s development. NOAA P-3 “Hurricane Hunters” routinely fly through hurricane eyewalls to gather storm data, but avoid flying close to the ocean because conditions are too hazardous.

Now, a new research paper led by NOAA meteorologist Joseph Cione demonstrates that observations gathered by disposable drones from the most violent region of the storm can improve the performance of hurricane models used by forecasters.

In recent years, unmanned aircraft systems, or UASs for short, have become increasingly important tools for atmospheric researchers, because of their low cost, reliability, and ability to operate in hazardous conditions. NOAA began exploring the use of UAS in hurricanes in 2005. In 2017 and 2018, Cione launched the Coyote unmanned aircraft into hurricanes Maria and Michael, two of the most powerful Atlantic basin hurricanes on record.

All of the other systems we use to measure winds inside a storm give us a snapshot of what’s going on,” said Cione. “UAS observations are continuous in nature. This is a big leap forward in the application of unmanned systems for hurricane forecasting.”

The drones were able to collect measurements of temperature and pressure, wind speed and direction, humidity and sea surface temperature as low as 360 feet above the water and at wind speeds up to 194 miles per hour.

Scientists said the data collected by the Coyote was consistent with the limited number of observations collected by the P-3 from the eyewall at low altitudes, which demonstrated the accuracy of the instruments. 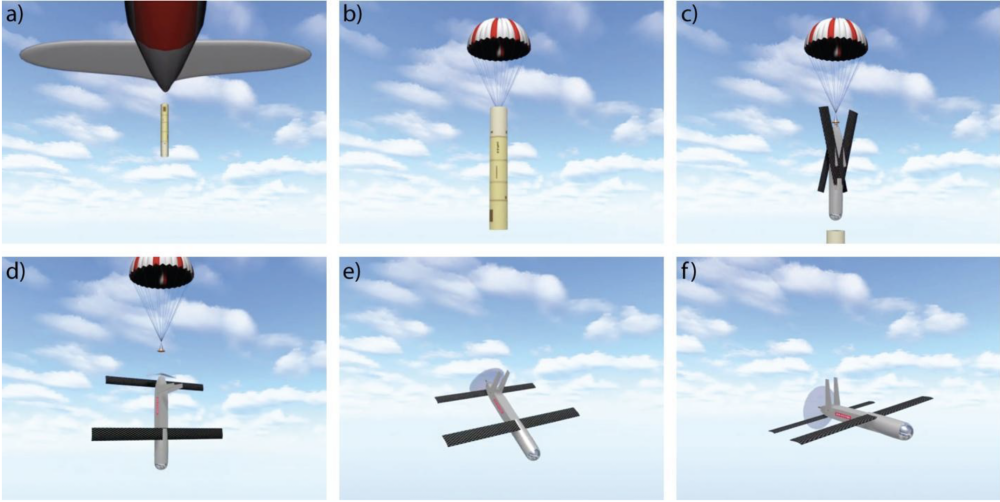 A depiction of the Coyote sUAS launch sequence. a) A Coyote is released in a sonobuoy canister from a NOAA P-3 aircraft. b) A parachute initially slows the descent. c) The canister falls away and the Coyote wings and stabilizers deploy. d) After the Coyote is in an operational configuration, the parachute releases. e) The motor starts and the Coyote levels out. f) TheCoyote attains level flight and begins operations

Accurately describing current storm conditions is important to forecasters at NOAA’s National Hurricane Center. With this small UAS platform, NOAA has the capability to get much closer to continuously monitoring  the maximum winds in a hurricane than is possible with manned aircraft or parachute-deployed dropwind sondes.

Co-author George Bryan, a scientist with the National Center for Atmospheric Research, used the unique data to conduct model evaluation, a key process in using observations to improve model predictions. Infrared sensors on the small UAS allow scientists to verify sea surface temperatures for NOAA’s coupled ocean-atmosphere forecast system. This provides the ability to identify where the models are not accurately representing estimates of the atmosphere near the ocean surface and provide correction. Such insight can be used in model updates to improve forecasts.

“Observations from small unmanned systems are so important,” said Ghassan Alaka, a NOAA scientist working on NOAA’s Hurricane Weather Research and Forecasting Model.  “They can help us validate and improve models, including predictions of the storm’s maximum intensity and what’s going on in the storm’s inner core.”

The study has been accepted for publication in the Bulletin of the American Meteorological Society and is available online.