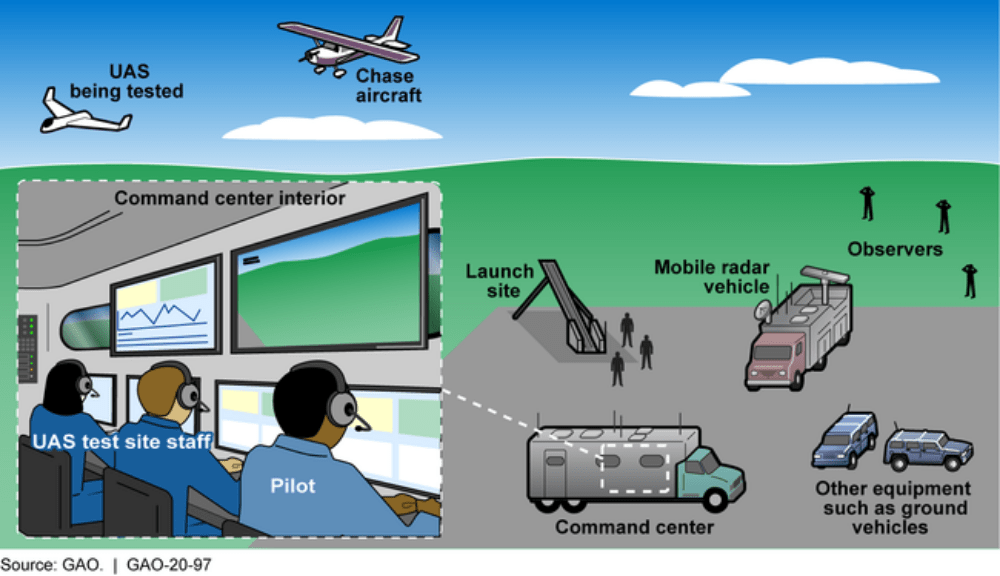 Example of UAS Flight Test Conducted at a Test Site

The Federal Aviation Administration, in coordination with industry, is working on safely integrating drones into the national airspace with manned aircraft. FAA has 7 designated drone test sites, which have facilitated about 15,000 drone research flights since 2015.

Both public and private entities have used the test sites to test technologies in preparation for varied UAS activities, from inspecting utilities to carrying passengers. Research conducted at test sites provides data on the performance of various UAS capabilities and technologies; such data could support FAA’s integration efforts.

While FAA collects this data from test sites, it has not fully leveraged the data or the program to advance UAS integration. According to FAA’s 2018 Roadmap for UAS Integration a key goal of this program is to provide data to support FAA’s decisions on drone integration. FAA officials said the agency intends to use the data to a greater extent in the future to advance integration. Without an analysis plan, however, FAA could miss opportunities to better use the data to inform the overall integration effort, such as to inform UAS operational standards.

All test site representatives and most users GAO interviewed, however, said that more information on test sites’ research would be helpful for UAS stakeholders’ research efforts. According to FAA plans, the agency must rely on relationships with stakeholders across government and industry to ensure that integration efforts are harmonized. By sharing more information publicly, FAA could demonstrate to such stakeholders how the agency is fostering and using research to inform and advance integration.

Further, with more information, more stakeholders may opt to use a test site to conduct their own research, thus potentially increasing data available to FAA to inform its integration decisions.

Why GAO Did This Study

UAS could provide significant economic and social benefits, for example by delivering packages or aiding in search and rescue missions. FAA is conducting a phased approach to incrementally integrate UAS safely into the national airspace. As directed by statute, FAA established UAS test sites to allow industry to assess the safety and feasibility of complex UAS operations, such as flying beyond an operator’s line of sight. FAA has stated that this program provides research results and other data needed to reach full integration.

GAO was asked to review FAA’s management of the test sites. This report examines, among other things: (1) the research conducted at FAA’s designated UAS test sites, and (2) how FAA is leveraging and sharing information from the test site program to advance integration.

GAO reviewed relevant statutes and regulations, reports, and FAA guidance; analyzed test sites’ efforts, including flight test data submitted to FAA from 2015 through 2018; and interviewed FAA officials, test site representatives from all 7 test sites, and 18 test site users, selected to include a range of perspectives.