Airspace Link, a unified airspace regulatory SaaS platform working directly with the FAA, state & local government and the drone industry, has announced the launch of its AirHub for Pilots & Government platform.

Airspace Link‘s recent FAA announcement underscores how and where their platform is set to make a difference throughout the drone industry. As a supplier of the FAA’s Low Altitude Authorization & Notification Capability (LAANC), pilots using Airspace Link may receive airspace authorization in near real-time. Additionally, data provided by state & local governments is integrated into the platform, allowing pilots to make informed decisions about local governance, scheduled events, or active emergency situations.

“When we look at the drone industry, we believe solutions for state and local government don’t align well with the unique opportunity communities have in supporting the growth of drone technologies. Given our background in infrastructure management and geospatial government solutions, Airspace Link has the right team at the right time with the right solutions” said Michael Healander, President & CEO of Airspace Link.

Part 107 (commercial) drone operations near airports last year could take up to 90 days to receive approval to fly at specific altitudes below 400 feet (using the FAA’s Drone Zone). More recently, Part 44809 (recreational) had no avenue to secure approval near airports (other than an excel spreadsheet identifying safe zones). With Airspace Link’s integration to the FAA and local government, drone pilots may receive approvals in seconds with the confidence that they’re working with a wider range of multi-jurisdictional data.

Airspace Link’s regulatory platform has identified 133 million citizens (across ~4,500 cities) residing under controlled airspace who are required to use Airspace Link’s platform (or similar) for approval to fly at specific altitudes. Drone operators are also required to check local drone ordinances where possible; but with close to 200 local government drone ordinances across the US (and growing), this effort can be a daunting chore.

Through the Unmanned Aircraft Systems (UAS) Data Exchange, Airspace Link facilitates the sharing of airspace data between the FAA and the UAS industry. Pilot requests are checked against multiple airspace data sources, such as UAS Facility Maps, Special Use Airspace data, Airports and Airspace Classes, as well as Temporary Flight Restrictions (TFRs) and Notices to Airmen (NOTAMs). If approved, pilots may receive authorization in near-real time from Airspace Link. 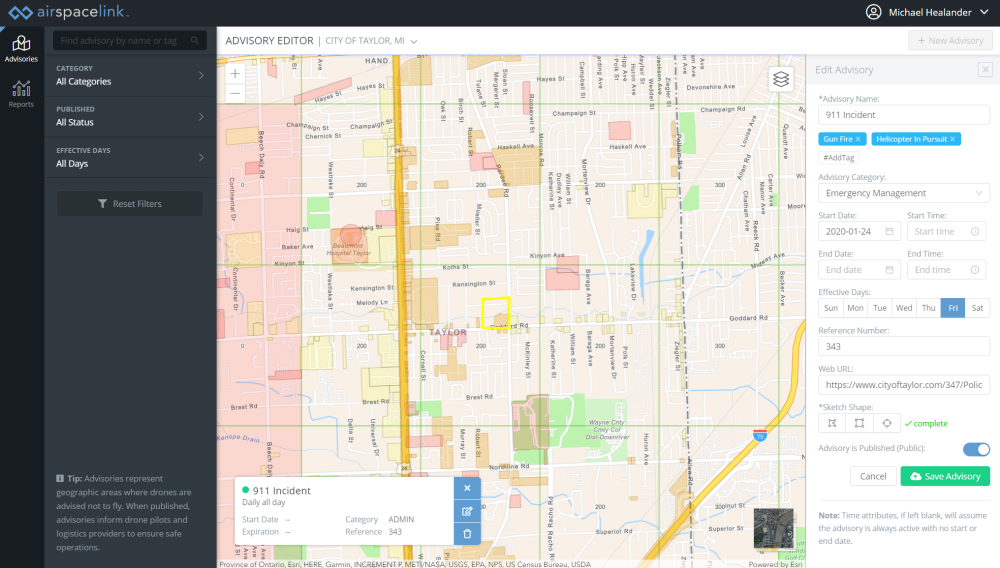 “Within the next 2 – 3 years we believe the skies will open up and drones will be an integral part of our economy. Airspace Link is a much-needed infrastructure layer for state and local governments to understand where drones are flying within their airspace, and to layer in rules and guidelines for safe traffic flow as they would on the roads. We are excited to partner with the Airspace Link team as they build the traffic lights and stop signs in the sky.” Jonathan Struhl, General Partner at Indicator Ventures.

With the new capital, FAA approval, city deployments and key industry partners, Airspace Link is well on its way to making sure the skies are safe and operating efficiently over hundreds of millions of Americans.

“We’re at the tipping point of the industry. The industry has taken longer than most would have liked, but it’s here and drones will have a platform to move faster in the coming year. Like Vanderbilt built the railroads, Airspace Link is building the ‘Highways in the Sky,’” said Michael Healander.