Save Time By Pulling Lead Lines With Drones

In remote locations, it’s often challenging — if not impossible — for linemen to drive their bucket trucks into a job site to set new structures and string power lines. To maximize productivity, electric utilities are taking an aerial approach to the work.

For example, in addition to using helicopters to install ropes on power lines, some utilities are also turning to providers of drone services. Service Electric Company (SEC) a Quanta Services operating company specializing in the construction of transmission and distribution systems and substations, has invented a drone tensioner. The company has also applied for a U.S. and Canadian patent on not only the device, but also the process of rope pulling with drones.

In turn, two companies, Alabama Power and American Electric Power (AEP), worked with Service Electric to pull the pilot rope prior to pulling conductors in rugged locations, therefore saving time in the field.

Southern Company, the parent company of Alabama Power, developed an unmanned aerial system (UAS) program to provide training, certification and oversight of all UAS activities. After obtaining their FAA Part 107 license, employees receive additional classroom and hands-on UAS training prior to be certified to fly for the company.

“The benefits of using drones are already being realized by many areas within the company and are expected to increase as the technology and FAA rules allow for their increased use,” said Joshua Stough, line construction project supervisor.

For example, Alabama Power and Southern Company is using drones for many different use cases and benefits such as routine inspections on transmission and distribution systems, storm damage evaluations and other areas such as public relations and land management.

When Hurricane Maria hit, Alabama Power, working as part of the Southern Company team, began using drones to assist with inspections in Puerto Rico. This experience demonstrated how the use of drones could assist when working in extremely rugged, inaccessible areas. Since working in Puerto Rico, Alabama Power has used drones to perform similar assistance following Hurricane Michael and other routine construction activities. 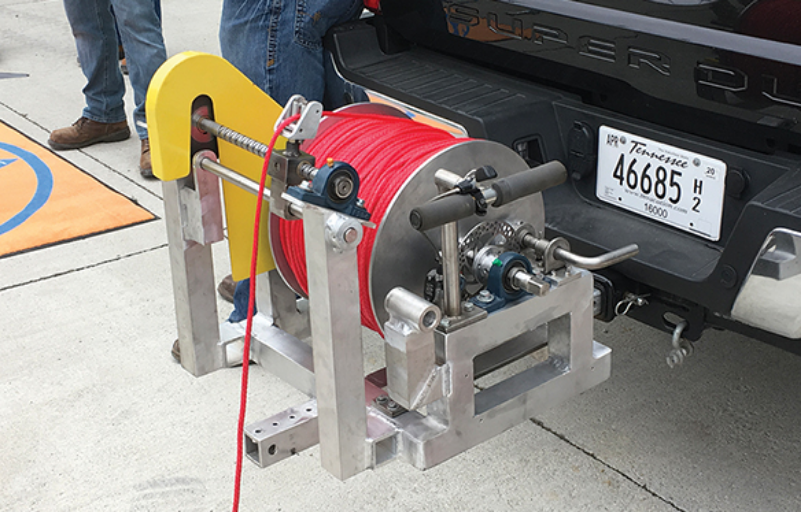 Today, Alabama Power uses drones for not only storm response, but also during line pulling operations by working with Service Electric Co. (SEC). Before using the drone tensioner, SEC used a bulldozer or a UTV to pull out the pilot rope. In some cases, the contractor would also use a device to launch a small line over a limited distance and then pull the pilot rope with it. If the distance was too far for the device or inaccessible for the equipment, then the contractor would use linemen to pull the rope.

SEC, however, offered a new way for its crews to pull in the lead line on a conductoring project. When the contractor visited the crews to provide a demonstration, it first conducted a thorough safety job briefing with all the workers involved. The meeting covered such topics as the distance to fly, landing zone, communication, wind and other variables with flying the drone. In addition, Service Electric also conducted a preflight procedure for flying the drone.

Next, the team connected the pilot rope to a quick disconnect on the bottom of the drone using a covered lead line. Once in the air, the drone was flown to a safe area for a drop point on the right of way (ROW) beyond the challenging terrain. The linemen at the structure caught-off the rope, and the workers then used the quick disconnect on the bottom of drone to release the pilot rope on the ROW.

In this application, the process saved several manhours and only required a few men to operate, which allowed the rest of the crew to continue working on the project.

“The biggest benefit was the safety of the process compared to attempting to accomplish the task using traditional methods,” Stough said. “I really enjoyed the part about the safety factor using the drone instead of men to accomplish this difficult task.”

Stough said the application was eye opening. “It demonstrated that drone technology continues to evolve and improve safety and efficiency in construction.”

AEP is also improving safety and efficiency with drones. Austin Harris, engineering technologist for AEP Transmission Field Services, said in addition to the new technology offered by SEC, the utility uses traditional methods to string wire-like helicopters and various manual ground-based stringing methods. While the challenges with all stringing methods are extremely situational, he said they include high safety risk associated with helicopters flying low and attached to the stringing equipment. Also, helicopters can have limitations such as the ability to fly in congested areas and under existing lines. In contrast, pulling line by hand can be tedious.

“It is labor intensive, time consuming and has inherent risks and challenges from traversing the right of way,” Harris said.

AEP, which regularly engages Service Electric Co. for line work, discovered the availability of its drone and tensioner by engaging with the contractor. Like any conductor pulling operation, the first step is to pull the lead line, also called the “rope.” This lead line is then used to pull in a heavier lead line or the conductor directly. This depends on various factors such as the length of the pull, elevation differences, the weight of the conductor and other factors.

SEC can use the drone to pull in the initial lead line to facilitate the pull back of the next phase. The drone takes off with the rope attached and flies the line to the end of the pull, where a line mechanic is ready to secure the rope in preparation of the next phase of the operation.

“This allows stringing of the rope over obstacles — such as other line crossings, and non-traversable ROW hazards — such as deep hollows or rivers, roads, etc.,” Harris said. “Once the initial rope is pulled, the drone is no longer used.”

Over the years, AEP has used drones for various applications including routine, detailed and emergency inspections, construction documentation, post-construction documentation, vegetation management inspections, aerial surveying applications such as volumetric and site surveys and thermal/infrared imaging. The utility is also continuously evaluating use cases as they arise. 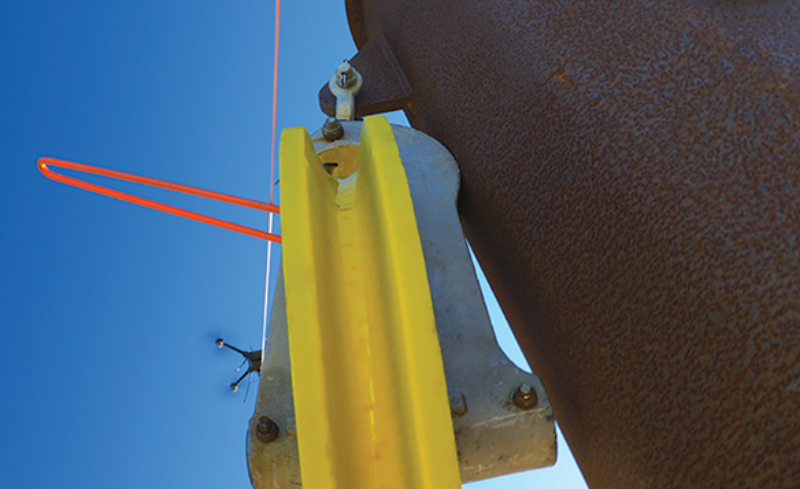 Using a drone to pull in the lead line provides multi-faceted benefits such as the reduction of risk from helicopters and traversing the ROW, the reduction of the need for additional resources to traverse existing line crossings and the ability to cross challenging terrain.

So far, there has been excitement to incorporate new technology into existing work practices at AEP, Harris said.

“While useful and beneficial, there are limitations to the technology including the ability to pull longer distances, higher tension and just the inherent challenges of incorporating a new method to achieve an existing task.”

Because the system is operated by SEC personnel, AEP does not need to train its employees to use it. As for working around the technology, the operation is similar to traditional methods of pulling rope when using a helicopter, so specific training for the operation is not required. As with any job and tool used for it, however, a detailed briefing is conducted to ensure that all parties understand the work plan/sequence, their responsibilities and the hazards associated with each task.

Looking ahead to the future, Harris said UAS will continue to be incorporated into daily work practices in the utility industry.

“As the technology and regulations continue to develop, additional use cases will emerge and become more viable. Essentially, a drone will become another tool to safely and efficiently complete work within the industry.”