Yale Students Get Snacks by Drone on Campus

Startseite/Yale Students Get Snacks by Drone on Campus

Hungry college students now have a new way of receiving snacks and sundries: drone-based package drops across campus without a delivery fee.

The company is conducting their testing with a small sample of students, who can order by obtaining a referral code from one of the startup’s ambassadors. After the testing period, the app’s developers plan to create an Android app and eventually expand beyond Yale’s campus.

“The convenience store business model hasn’t been updated in a hundred years,” said co-founder Cat Orman ’22. “Delivery is expensive, inefficient and pays drivers terrible wages. We created Kiki Air because we want to bring that model into the future in the way that creates real jobs and reduces the carbon footprint.”

In its current model, after an order is placed and a drop off location is selected by the app’s user, sundries are loaded into packages and attached to drones. Once a drone is near the selected drop-off location, a Kiki Air pilot and another Kiki Air staff member call the customer to ensure that the area can safely receive a package — clear of birds, trees and other potential obstacles. The drone then drops the ordered snacks, in a padded envelope, for pick up.

“The app is so well made and user-friendly,” said Kiki Air ambassador Morgan Ross ’22. “I think once it is established at Yale and perfected, it can spread to other campuses.”

Company CEO Jason Lu ’20 conceived of the original idea for the company as a final project for a Yale course. Lu later recruited co-founder Josh Ip ’22 to develop the code for the app, and co-founder Orman to work on publicity and marketing. Since then, Kiki Air has undergone two rounds of testing on campus for periods of about two days at a time, in which they offered $5 worth of free snacks when ordered through the app. 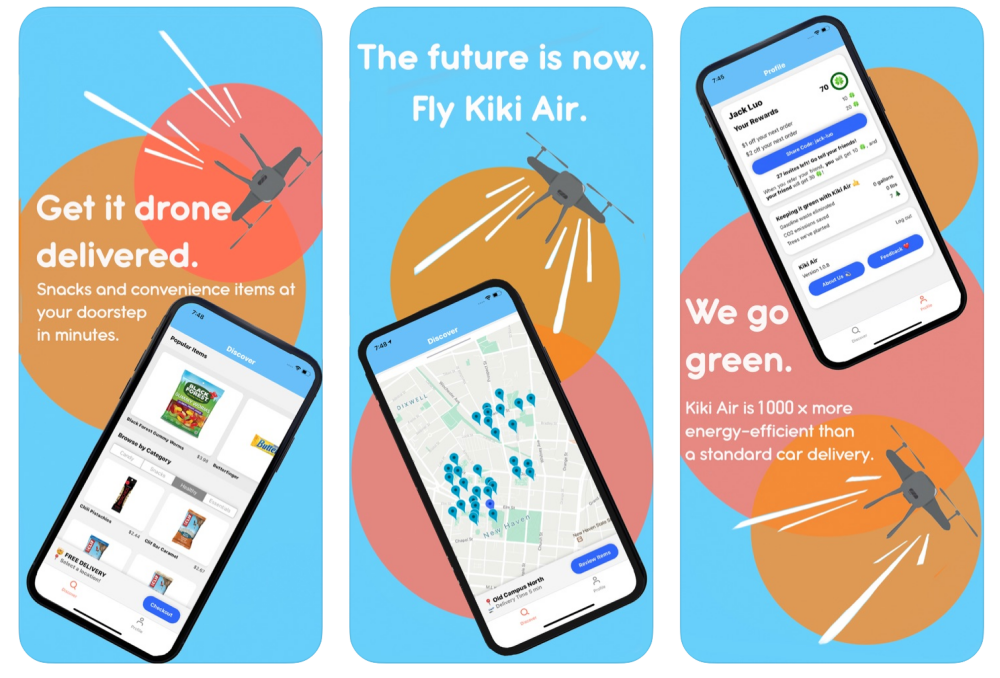 The startup has already seen success, having been selected in the winter batch for Y Combinator, an extremely competitive accelerator based in Silicon Valley. Y Combinator has funded and accelerated over 2,000 companies, including Airbnb, Dropbox and DoorDash. Kiki Air has chosen to defer involvement with Y Combinator to the summer.

Aside from the $150,000 grant from Y Combinator, which the company is set to receive in the summer, Lu, Ip and Orman have also secured funding from multiple angel investors, who “want to try something new to better the future,” Lu said. They plan to use this funding, in part, to expand to other college campuses.

Still, the company’s first few weeks on campus have not gone without controversy. Video footage obtained by the News shows a Kiki Air drone falling from the sky on Library Walk — the walkway between Branford and Jonathan Edwards Colleges — on Thursday night. The incident was confirmed by two Yale students who were on Library Walk when the drone made contact with the ground.

Still, Orman insisted the incident was a “controlled landing.” Lu underscored that the founders “take safety extremely seriously.” The company has spent “so many hours training these pilots making sure that they are supervised and [that the company wants] to make sure that the Yale community is protected,” Lu said.

He said that one reason no one was hurt in the Library Walk incident was that the pilot followed proper safety protocol.

After the incident, the company has since changed its drop-off locations and has given its pilots more training.

Still, seven Yale students interviewed by the News about Kiki Air said they have had positive experiences with its service.

“I ordered right when they launched the app,” Linton Roberts ’23 said. “I think it’s a neat idea and I think it’s cool that they’re doing Popeyes sandwiches. Hopefully they can expand.”

Kiki Air is planning to launch fully next semester.