Aerobatics with a Manned Racing Drone

Drone Champions AG, creators of the Drone Champions League and DCL – The Game, have announced their newest innovation: the first-ever manned drone capable of aerobatic maneouvers such as rolls and loops.

The “Big Drone” is the brainchild of Drone Champions founder Herbert Weirather, who personally assisted in the testing process, sitting in the single-seat machine as it was piloted via RC controller by former Drone Champions League contender and multi-discipline champion Mirko Cesena in Vrsar, Croatia.

“We have developed and built the first-ever manned aerobatic drone with the vision to create a brand-new future racing experience and to recruit drone pilots through DCL – The Game,” explained Weirather, who is also CEO of the Drone Champions League. “Everyone should have the opportunity to fly, and DCL – The Game provides a starting point.”

Blurring the lines between virtual and reality, the Drone Champions League is an innovative race series that since 2016 has drawn the world’s best pilots of small racing drones (quadcopters), which reach over 160 km/h in head-to-head battles. The recognized World Championship of professional drone racing teams, the DCL holds Drone Grand Prix races at spectacular global stops, and offers everyone the chance to realize the dream of becoming a pro pilot by playing DCL – The Game.

The manned racing drone by Drone Champions AG has 217 brake horsepower and produces 660lbs of static thrust, reaching a top speed of 87mph during test flights

After months of development, in early February Drone Champions AG initiated testing of the Big Drone at an indoor facility in Germany before taking it to Vrsar for its maiden outdoor flights, where aerobatic maneuvers were successfully executed. On hand to witness the historic milestone were members of Flite Test, which produces expert content specifically to serve the RC community.

“I feel like this experience is honestly a new chapter for multi-rotors. To be able to have kids go into the hobby and aspire for bigger things is always a goal of Flite Test. To see them now aspire to actually fly a manned multi-rotor is absolutely incredible” exclaimed Josh Bixler from Flite Test.

Next, Drone Champions AG will use the test data to continue refinement of the Big Drone. Meanwhile, aspiring pilots can play DCL – The Game to build their skills for competition in the DCL tracks of today and the Big Drone battles of the future. 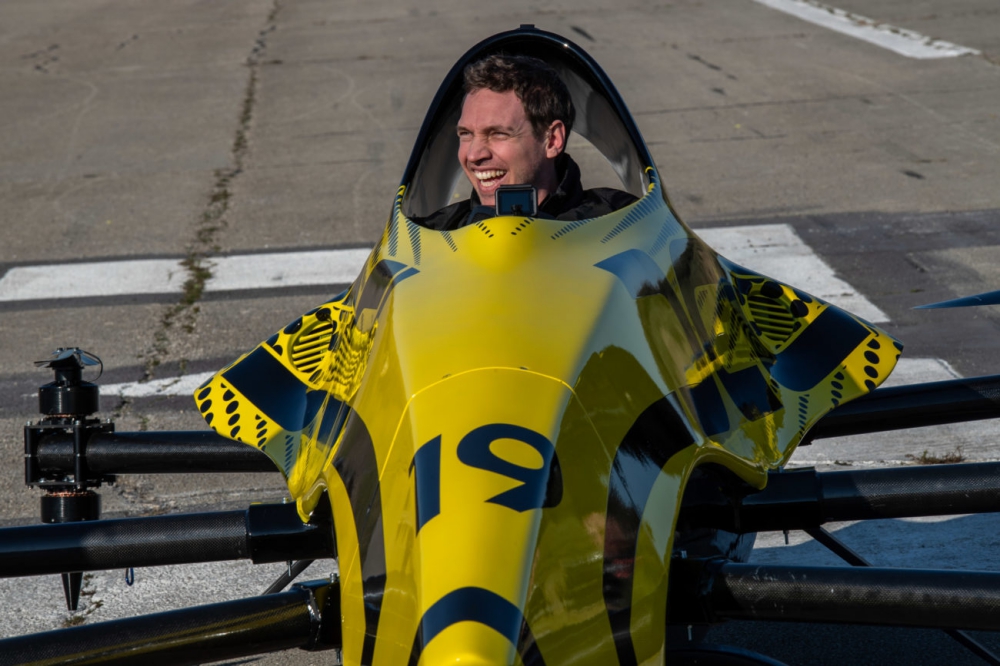 The “Big Drone” is Herbert’s brainchild, and he personally assisted in the aircraft’s first outdoor test, sitting in the single-seat machine as it was piloted via RC controller by former Drone Champions League contender and multi-discipline champion Mirko Cesena in Vrsar, Croatia.