Evolution of UAVs Employed by Houthi Forces in Yemen

Houthi-produced UAVs on display at an exhibition in Sanaa, Yemen, 7 July 2019

In July 2019, Houthi forces unveiled a collection of UAVs, which they claimed to have manufactured domestically. Eight types of Houthi-manufactured UAV have been identified in media reporting: Hudhed-1, Raqib, Rased and Sammad-1 (Reconnaissance UAVs – although the Sammad-1 can be weaponised), and Qasef-1, Qasef-2K, Sammad-2 and Sammad-3 (Combat UAVs).

CAR is an independent investigative organisation that tracks the sources of weapons, ammunition, and other military materiel that have been diverted into the hands of non-state armed actors. CAR’s field-investigation teams co-locate with national governments and local security forces on the ground to document illicit weapons that have been captured, surrendered, lost or left behind during fighting. CAR’s EU-funded iTrace project is the world’s most powerful public access weapon-tracking database.

This is an abridged version of an article which is republished with permission from Conflict Armament Research, and comes from CAR’s February 2020 dispatch, ‘Evolution of UAVs employed by Houthi forces in Yemen’. 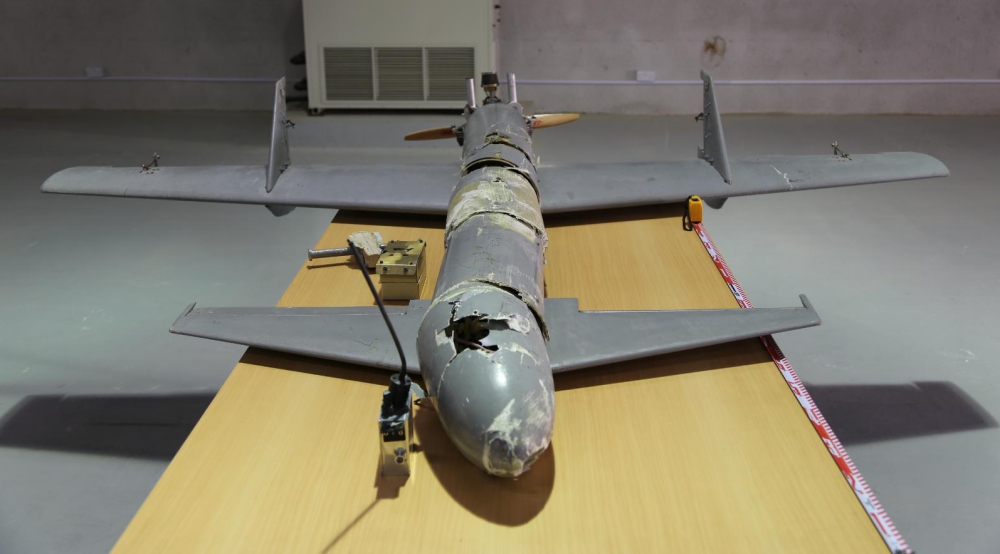 The Qasef-1 is a first-generation, rudimentary UAV in service with Houthi forces in Yemen. It is virtually identical in design, dimensions, and capability to the Iranian-manufactured Ababil-T UAV.

The Qasef-1 has an estimated maximum range of 200 km; when operated from the western part of the country (where the Houthis hold control) its targets are therefore restricted to those that are on Yemeni territory. Recently, Houthi forces have fitted the Qasef-1 with improvised fragmentation charges (including nuts and bolts), which are initiated in flight and directed at soft targets, including exposed personnel below.

The most notable use of these charges took place on 10 January 2019. A Qasef-1 UAV (or Qasef-2K, which looks almost identical; it is impossible to identify which of the two models was used in the attack) detonated in the sky above a Yemeni government base during a military parade. Six people were reportedly killed.

The fuselage and wings of the Qasef-1 UAVs bear printed and written serial numbers, which correspond to handwritten serial numbers applied to various internal components. The serial numbers, some of which are consecutive, indicate that the UAVs were manufactured on the same production line and that an external source supplied them to Houthi forces for further assembly. The components display a relatively high degree of precision in their fabrication; they are well assembled and markings on the electronic components point to industrial production and quality control processes. Some internal components match those found in Iranian-made UAVs. 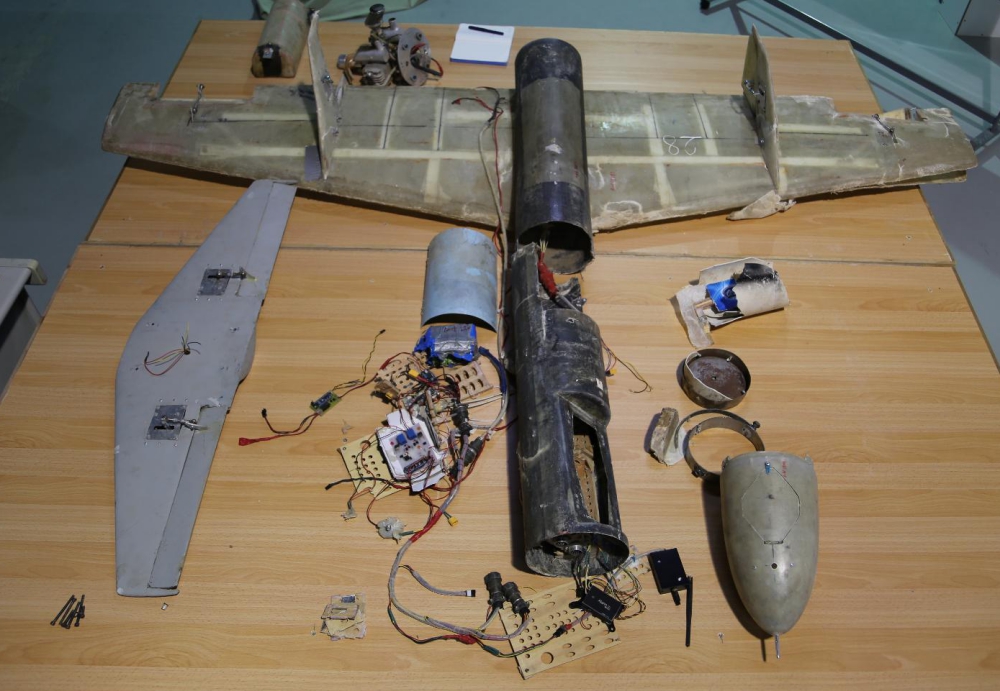 In July 2018, a CAR field investigation team documented a Qasef-1 UAV that UAE forces reportedly captured in an unidentified location on the western coast of Yemen on 18 April 2018. While the UAV’s engine and internal components are mostly identical to those of the industrially manufactured Qasef-1s, the frame is poorly constructed and comprises both industrially produced parts and crudely moulded fibreglass parts. CAR suspects that Houthi forces may have produced this hybrid frame domestically. 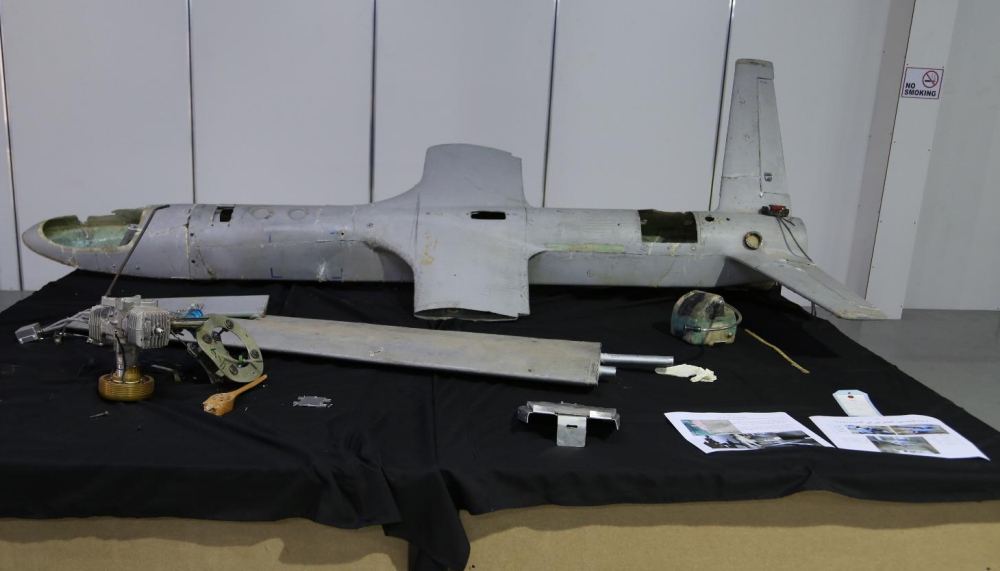 In an effort to expand the reach and impact of their UAV capabilities, Houthi forces began deploying a new, more advanced UAV—the Sammad—in mid-2018. According to various media releases, the UAV comes in three variants. In addition to its distinct design, the Sammad features a larger warhead than the Qasef-1, and it has a more powerful engine, which provides it with a longer effective range.

The Sammad has an estimated maximum range of 1,500 km, which supports claims by Houthi forces that they maintain the capability to strike targets outside of Yemen. The Sammad has the same exterior cast and paint colour as the imported Qasef-1.

In September 2018, CAR documented a Sammad-pattern UAV, which UAE forces reportedly had captured on Yemen’s west coast on 21 June 2018. Several of the components resemble those of the Qasef-1, but with a few notable differences.

Since March 2015, when the current conflict in Yemen began, Houthi forces have demonstrated an increasing ability to inflict damage through the use of UAVs. They deploy a variety of reconnaissance and combat UAVs, which they have assembled using imported parts, or a combination of imported and domestically manufactured components. Their use of UAVs has evolved thanks to growing domestic capabilities, and to their acquisition of more sophisticated materiel from external sources.

Having previously relied on un-weaponised UAVs to destroy Saudi-led Arab Coalition weapon guidance systems—by crashing them into sensitive electronics, such as radar units—Houthi forces now employ longer-range UAVs, which are designed to deliver an explosive payload. These forces appear to have started producing a hybrid UAV, parts of which are manufactured domestically, rather than utilising only externally sourced industrial models. Since airframes are the largest component of a UAV, they are presumably more difficult to smuggle into the country.

All other photos: Conflict Armament Research